Last Monday Ben started us off on the letter O with a big Ouch!  He was sitting against a wall under a heavy wooden picture frame.  Meanwhile, his brothers were kicking the same wall.  When the frame came down, he got a pretty big gash on his head and ended up with three staples.  Poor boy!

He and Sam were already staying home sick that day.  They stayed home again Tuesday, and then had early out Wednesday through Friday, so we spent LOTS of time together last week.  Makes me almost miss home school.  Almost.

Anyway, it was fun to have all the kids around for activity time Tuesday morning.  We read about the wolves in Little House on the Prairie and practiced howling at the moon: 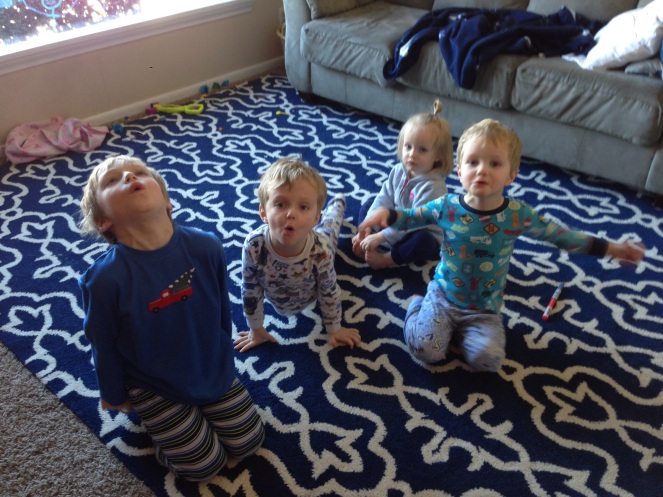 Then we tried to think of something to make with the letter O and came up with Octopus.

We just cut legs and bodies out of construction paper,

and glued.  Don’t judge my octopus body shape.  My main objective was to make room for all the legs.  Does anybody actually know their real shape anyway?  Octopuses are so weird!

Unfortunately I didn’t have any brads to attach the legs so they could move, but oh well.  You can’t do last-minute, zero-preparation crafts AND make them perfect.  Oh, and they wouldn’t/shouldn’t be perfect anyway, right??

I thought the boys might want googly eyes or pompoms for eyes, but they all decided on googly eyes AND pompoms. 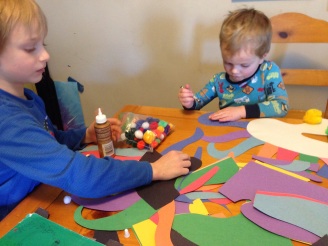 Sam embellished his octopus with those little suction-cup things (there’s probably a proper name for those – ask my kids).

They all took their octopuses downstairs to watch some Wild Kratts episodes about ocean creatures and I probably took a nap.  Life with a very sick, very miserable 2-year-old is rough and so you take what you can get.