There were two houses for rent on the same street: the run-of-the-mill rambler with clean white walls and new carpet, and the 100-year-old farm house with a big yard, a charming porch, and a laundry room hidden behind a secret bookshelf door.  I’d been a mother for all of four months and knew next to nothing about babies, so I chose the lovely farm house, paying no attention to the long, un-gate-able wooden staircase with a stone landing or the two jagged brick hearths.  The big box elder trees just outside the front door provided plenty of shade and plenty of box elder bugs for my son Ben to eat as he rolled around on the floor.  The gap under the stairs by the refrigerator was a fun place for him to dig for mouse droppings.  But when he started crawling (right at six months, to my dismay), I really had my work cut out for me.  I spent all day following him around so he wouldn’t fall down the stairs or touch the exposed furnace or crack his head on the ledge by the entryway.  It didn’t take me long to realize I needed a way to both contain and entertain my bouncing baby boy so I could sit down once in a while.  Then one day, at a consignment store, I found the perfect solution: an exersaucer!  This modern wonder kept the baby in one place while he bounced, rocked and played with colorful, spinning, noise-making toys!  Working from home became a lot easier and all was well.

But after a few months he outgrew the exersaucer, or rather came to resent it, as he knew it meant restraint and usually separation from Mama.  He learned to tip the thing over and crawl right out.  Fortunately I was saved when we moved to a more kid-friendly house with carpeted stairs and no major pest issues.  The baby roamed free and the exersaucer went to the attic for storage.

Two years later the saucer reappeared when my second son, Sam, needed it. 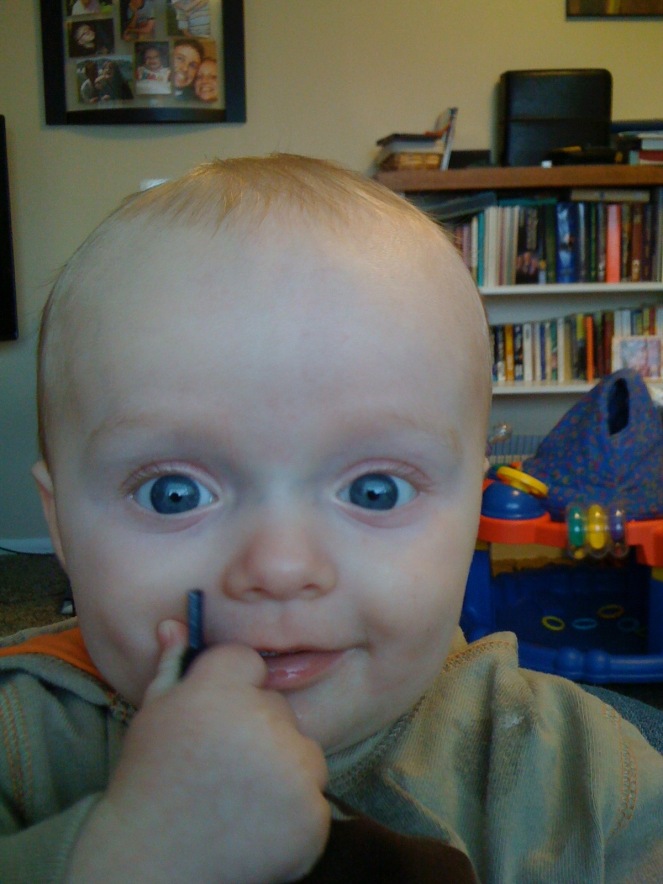 But the floor plan of this new house wasn’t as open and the saucer got in the way.  I happily packed it away as soon as he was tired of it and reluctantly got it back out for boy #3 a couple years later. 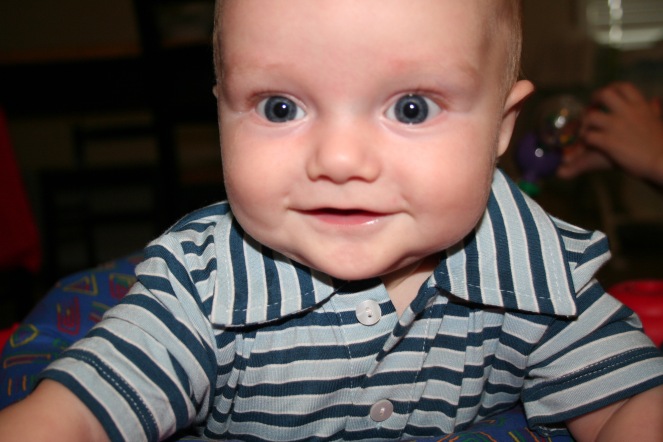 After Miles’ turn of using and abusing it, it made one more trip to the attic, then came back down again last year for our baby girl Eliza.  This time it only had a few toys left, some of which were not quite functioning the way they should.  She didn’t use it for very long, and since it was so big and awkward and noisy, and always in the way, I stuck it outside one day with a sign that said “FREE!”

After a while I opened the blinds to see if anyone had taken the exersaucer, and when I saw it out there, all alone on the parking strip, I was struck by how small it looked.  Inside our living room it was enormous – it took up the whole room and made so much noise!  The bigger kids would often climb in and pull each other around in it, usually leaving it in a hallway for someone to loudly trip over at night.  It was just a big, loud, crazy, substantial fixture in our home.  But out there in the world, it was so tiny.  Just a few square feet of plastic sitting on the grass.

I got a little nostalgic and had to fight the urge to go back out and get it.  I went and got Ben, now seven years old, and we watched out the window together while I told him stories about him as a baby.  After a few minutes, a woman pulled over and picked up the saucer, unceremoniously put it in her trunk, and drove away.  Ben shouted “Sold!” and we laughed, but I couldn’t shake the strange attachment I felt for that little toy.  It had been in our lives for so long and now, just like that, it was gone.

It wasn’t until that night when I told my husband about this experience that I realized why it was haunting me.  That exersaucer, in all its space-taking, noise-making glory, was just like our kids – loud and crazy and taking up the whole house (and our whole lives).  We are in the thick of child-raising right now.  With four kids ages 2-8, sometimes it feels like it will be like this forever.  But it won’t.  Before we know it, those kids will be out in the world and looking quite small.  The noise will fade, the house will stay clean when it’s cleaned, and our home that is filled to bursting now may feel a little too spacious, too quiet.  We’ve all heard it before, but childhood is fleeting.  Hopefully it won’t end with our kids out on the curb with “FREE” signs around their necks, but one way or another, these little people will be out of our homes, out of our way.

But they’ll never be out of our lives.

My kids will be tiny little specks in this great big world when they go off on their own.  But I’ll still be their mom, and I’ll still be here to help them.  For now, I’ll try not to let the noise and the mess keep me from enjoying them while they’re still here, filling my home, my life and my heart to the brim.

2 thoughts on “The Enormous Exersaucer”