I think every mom knows at least one (or 25) other mom/s that she admires and would like to be like.  I certainly have my fair share of mothers I look up to, but a surprising amount of them are fictional.  Here are the women (and some animals) I’d like to be like when I grow up, as found in children’s books. 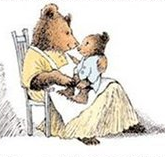 Little Bear is one of a handful of books I remember vividly from when I was a kid.  Little Bear is so much like any child with his ideas that don’t always work out and his limited understanding of things.  And his mom is just perfect.  Always patient, she hears him out, asks him questions to get him thinking instead of just shooting down his ideas, and goes along with his choices.  She lets him learn from his own trial and error.  She’s warm and relaxed, a little plump, and plans wonderful surprises for her little cub.

#2 – “A snoring granny” from The Napping House by Audrey Wood 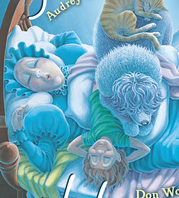 So technically she’s a grandmother, but that totally fits my criteria.  Besides pulling off some crazy sleeping positions, this awesome lady lets everyone pile on top of her during her nap.  When the flea bites the mouse and everybody wakes up and goes flying, the granny breaks the bed.  But does she let that upset her?  No!  She has a huge grin on her face!  The last page shows everyone outside the napping house.  The granny is there with arms outstretched toward the child, obviously so happy to just be there together.  Joy.  That’s all.

#3 – The mom from Pirate Boy by Eve Bunting 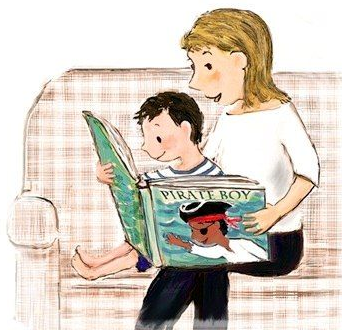 This mom rocks!  She will demonstrate her love for her son by riding a dolphin out to sea and fending off a sea monster AND a band of pirates with her magic shrinking spray!  In addition to being so brave, she is kind, so after they’ve ridden the pirate ship to the beach she will let the pirates spray themselves big again so they can be on their way.  “They were not really bad pirates.”  She goes along with her boy’s imagination and uses her own to make the story even better.  And in the end they have cookies and milk.  Who could ask for anything more?

#4 – Mother Rabbit from Shall I Knit You a Hat?: A Christmas Yarn by Kate Klise

In this book, Mother Rabbit knits a hat for Little Rabbit to protect his ears from the cold and snow.  It’s an awesome double-cone-style hat that fits over each ear separately and ties under his chin, by the by.  He loves it and wears it everywhere, including during dinner, and they end up knitting hats for all his friends.  Ok.  So… do you knit?  I do.  So I can appreciate the amount of time and effort (and $$$) it takes to make just one nice, custom-fit hat.  And I think after that I’d have a hard time letting my precious work be anywhere near food+children.  Maybe if I were a more experienced knitter, or if I had more time to knit, it wouldn’t be that big of a deal, but as it is, I think I’d be lame and make him take the hat off to eat.  And let me just say, there ain’t no way I’d make them for all my kid’s friends, especially if they were all different animals and needed an extreme variety of shapes and sizes of hats.  Mother Rabbit is a great example of giving and fostering the budding generosity of her child.

Ok, I’ve already written about this book, and this is another grandmother, but I can’t not recognize her for the amazing life lessons she gives her granddaughter.  “Believe in yourself and the world will believe in you too!”  There’s more, but just go read the book already.

#6 – Sal’s mother in Blueberries for Sal by Robert McCloskey 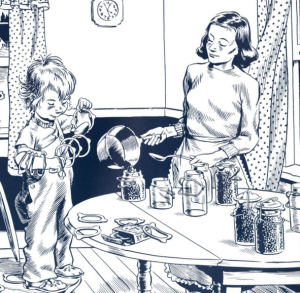 If you don’t know this book, you need to.  It’s just so lovely and nostalgic.  While it could be argued that the mother here is somewhat neglectful, since she doesn’t notice her child wandering off and following a mama bear for a while, all’s well that ends well and this mom is just doing her best.  We’ve all been there, right?  I mean, not quite there, but you know what I mean.  Anyway, she needs to gather berries to can for the winter, and she simply involves little Sal in the work of the day.  I love this picture from the inside back cover.  It shows the two of them in the kitchen, mother somewhere in the process of canning, and Sal standing on a chair with canning lids up and down her arms.  The project is spread all over the otherwise-tidy kitchen, which just reminds me of when I was little and my mom would do the canning.  It’s such a huge project and you might as well get everyone involved.  I think there is a modern tendency to separate children from housework, as if they can’t coexist.  They ARE kind of opposites in a lot of ways, but I believe that children need time with parents, whether they’re working or playing or both.  You don’t have to totally neglect work so you can spend time with your kids, and vice versa.  Just make them a part of it.  Within reason, of course!  This is a whole other topic, but I just like how Sal’s mom just does the stuff and takes Sal along for the ride.  I’d like to be better at that.

#7 – Mother Abbott from The Easter Egg Artists by Adrienne Adams 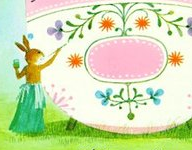 The Abbott family (rabbits) paints Easter eggs for a living.  When Father Abbott is concerned about their son Orson’s lack of focus on his work, Mother Abbott says “Remember, he’s still a youngster and needs to play.”  Orson’s mother and father are patient with him, letting him be a kid and find his own interests, and then supporting him when he applies his interests in the family trade – like wanting to paint their car like an Easter egg and inventing “comic Easter eggs” with funny faces on them.  His creativity ends up bringing them more business than ever and the book ends with him painting everything including the flagpole.  I love this book for the sense of family belonging and culture but also celebration of individuality within the family.  Also the illustrations are superb!

Mrs. Piggle-Wiggle is the bomb.  She doesn’t even have children of her own, but all the kids in the neighborhood always hang out at her house because she’s just kind and loves them and lets them be kids.  She understands them better than anyone and helps the parents solve all kinds of behavioral problems with her “cures” – like planting radishes all over the little girl who never takes a bath, lending a rude parrot to a talker-backer, and never cleaning the messy boy’s room until he’s trapped in there by all the toys and he has to take his meals through the window served up on a rake.  I’m not sure how many books they are, but they’re hilarious and I would love to be just like Mrs. Piggle-Wiggle someday.

Runners-Up (great characters, but I’m not willing or able to write a paragraph on them):

Oh!  And a special mention here for my favorite fictional mom NOT from a book, but a TV show.  Drumroll please….

This woman is amazing.  She never loses her cool and is always calmly teaching when she could be annoyed or disinterested.  And she knows the best songs, am I right??  Of course, all the adults in this show are pretty much perfect, and they all know the songs, so I guess kudos all around.  My favorite episode is when Daniel learns to “take a deep breath, and count to four” (when he’s mad).  Mom Tiger has to do the same when Daniel and his friend dump sand all over the living room floor.  She’s barely keeping it together but she calms down before dealing with the situation.  Just imagine if everybody followed her example!